Shining lights in the midst of poverty. 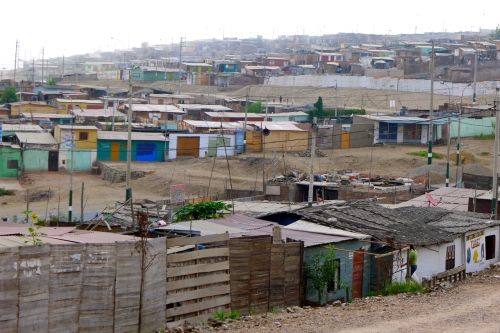 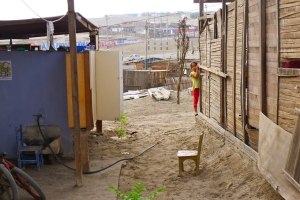 This last week I visited two of our missions that I had not visited before.  Both in Lima, they exemplify a core conviction upon which our mission as the Anglican Church in Peru is founded: Where there is poverty we will do all that we can to bring the light of Christ, dignity and care.

but to do justice, and to love kindness,  and to walk humbly with your God? Micah 6:8

I visited the communities of Ventanilla and Independencia; both communities are at the “end of the line.” 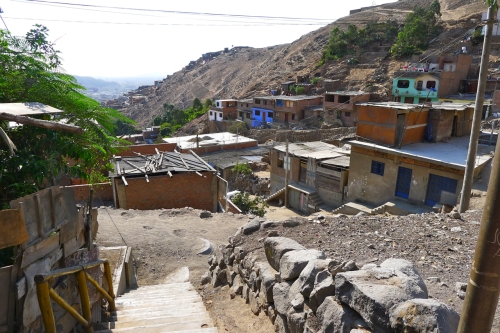 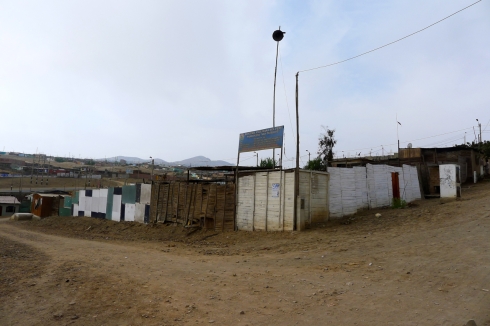 Ventanilla is out in the country, north of Callao.  It is along the coast and features land given by the government to “discapacitados” – disabled people.  After a bus ride of two hours, changing once or twice, I arrived in the midst of neblina.  This rolling mist comes off the ocean and is caused by the Antarctic current meeting the desert heat.  I could hardly see the sea, and what I could see was soon hidden.

The outside is bordered by old wooden fences and pieces of packing crates.  Inside there is a concrete floor with a roof, a storage area and bathroom.  There is a sandy area for play and on one side a lush garden.

the game of Twister is international! And fun.

Fr. Jaime is a gardener.  Inside the roofed area quantities of small plants sit in black plastic bags.

As we walked up the road from the bus stop, we were greeted by children and mothers, obviously delighted to see us. 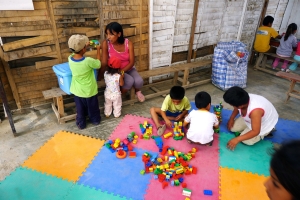 Deacon David was coming to celebrate his children’s hour.  In a trice there were games set up in stations and children playing happily.  Every person received a mandarin orange as a snack.

This girl loved having the fluffy bear touch her face

Coloring their Moses in the basket pictures

In a while, we moved on to a singing and prayer time that preceded a talk on the baby Moses being saved by being put in a basket on the river.  Each child had a coloring sheet that turned into a “moving picture” of basket bobbing on waves.  It is a baptism story of salvation and of God’s plan.

When it was over I chatted with some of the mothers.  One struck me powerfully – probably not more than thirty years old and all that was left of her teeth were black stubs.  Her body showed all the signs of malnutrition. This is a community that cares for one another as they live in shacks, which in North America we would not use to house animals for fear of animal welfare groups.

David promised to return the next day – Sunday – to spend time with the adults and have a church service.  He is an amazing young man and clearly loves the people in his charge.  He brings the light of Christ, dignity and care.

This is the borrowed space where the community meets for worship

Independencia is also in north Lima, but much closer.  I got off the Metropolitan to meet Fr. Esteban.  We got into a “moto” – this is a tiny three wheeled taxi based on a motor scooter like a Vespa.  We headed up the road that ascends the hillside.  After the moto left the tarmac, we continued a way up the sandy, stony road, until it could go no further.  It stalled because of the incline and our combined weight.  We walked the few hundred feet to a stone wall that had steps to lead people higher.

The Diocesan mission is called Espiritu Santo.  But there is no building.  I met some of the families. I met a woman in her home where they host services on a Sunday morning.

We hiked with her up a steep slope to a house with a crude kitchen set up with huge pans.  She serves hot milk Mondays through Fridays after school.  It is life saving to these malnourished children.  In our conversation she appealed for help with health and vision problems.

The good news is that I could talk to Dr. Townsend Cooper upon my return.  Fr. Esteban has now made a formal request for a medical team.  It looks as if this will happen soon, including eye tests and some eyeglasses for children and adults.

Fr. Esteban and I made some house calls.  These are the most amazing people.  They have an innate dignity.  They will not beg and are industrious where possible.  In one home a group of three women were putting backs on ear studs that would be sold in a local market.  The woman in charge was widowed two years ago when a huge bus wrecked their car and killed her husband.  She was injured.  There was no compensation or insurance.  She just waited to heal and got on with finding her own way to start this business and become self sufficient.  Meanwhile she employed the other two women to help.

In another home I met a young couple with two children.  Again the home was crude.  The floor was of deeply pitted earth.  I was treated to a glass of Inca Cola served from their refrigerator.  When visiting in shanty town homes, one develops a facility to absorb Inca Cola! 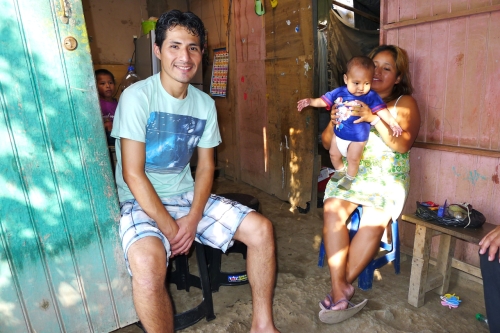 Fr. Esteban is a non stipendiary priest.  He has a regular job and this is his vocation – to love and serve the poor in this little area.  Again a light for Christ in the midst of abject poverty. 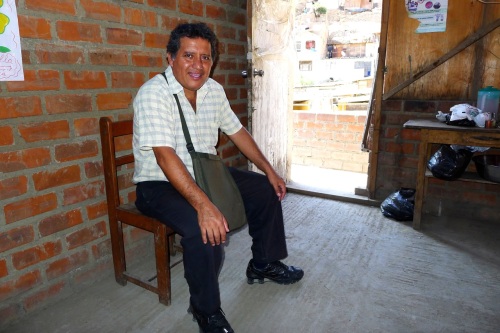 What a privilege it is to serve on the front lines in Peru, to be supported by so many senders.  The Anglican ministry here is only possible because of generous support – thank you.

2 responses to “Shining lights in the midst of poverty.”