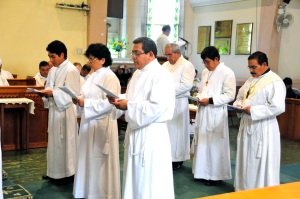 As the Diocese of Peru is growing, we are ordaining more people to work in the harvest field.  God has blessed the diocese with men and women eager to minister in the villages, towns and huddled communities in shanty towns or on mountainsides, in city or countryside. 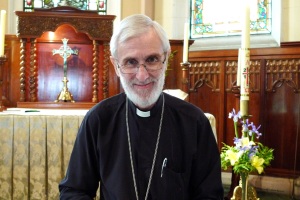 Bishop Godfrey’s vision in 1998 was of a socially and spiritually evangelical and catholic outreach in the name of Christ. When he became Bishop of Peru and moved from Uruguay where he was a USPG missionary and first bishop, he had a vision of a Peruvian Anglican Church that would transform lives with the Good News.  He started with four clergy, two missionaries, an expatriate congregation and few congregations.  Now there are about fifty-five worshiping communities and a new diocese based in Ica, with a bishop evangelist at the helm.  We have missions in formation up in the high Andes, inLima and its shanty-towns, and on into the south.  We are working with other church groups to the north and beyond who want to become Anglicans.  We have missionaries from  SAMS and CMS.  This summer we will add missionaries from England and the USA, including our first doctor to head up our medical ministry.

Our training for ministry has developed from a small seminary in Arequipa into a Lima-based training school for lay and ordained ministry using both local classes and online instruction in collaboration with other Latin American dioceses.  We call it the Saints Augustine Seminary – very Anglican! 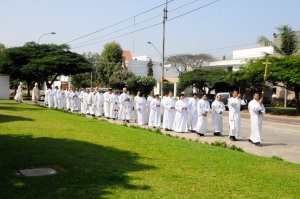 The clergy in procession - how God has enlarged us in 13 years!

This past month, three men were ordained priests and a woman and two men became deacons at the Cathedral Buen Pastor in Lima.  The diocese of Peru gathered to worship and celebrate as Jerry Acosta, Mariela Espinoza and Nestor Mogollon were made deacons and Juan Marcos Ayala, Luis Vizcarra and Pastor Zevallos were ordained as priests.  They serve variously in Lima, Ica, Juliaca and Arequipa.  Lessons were read in Quechua as well as Spanish to signify the ethnic outreach of the Diocese.

One of our new priests, Padre Juan Marcos Ayala, is a testimony to the effectiveness of mission teams.

Juan Marcos being vested by Vicky, his wife.

Juan Marcos manages an “hostal” in Arequipa. In 2004 a parish team from St. Thomas, Menasha, Wisconsin, were staying there. Such was their worship and witness that Juan Marcos committed his life to Christ.  He later heard a call to the priesthood.  He continues to manage the hostal along with overseeing the church of San Lucas and the mision Santiago Apostol.  He serves on the board of the orphanages in Arequipa.

Deacon Nestor is serving with Fr. Juan Marcos at San Lucas Church and its mission outpost – Santiago Apostol.  Santiago Apostol is up in a shanty town above Arequipa and nestles below the volcano Misty.  Nestor comes from Cristo Redentor, Arequipa, one of our early Anglican churches in Peru where he has been formed and trained as an Anglican while contributing his musical gifts to the church’s lively music ministry.

Luis Vizcarra is the first of a new generation.  His mother, Naty, despaired for his life when he was three months old.  Naty is a contemporary Hannah.  Luis was brought up in the then tiny Anglican Church in Arequipa.  This makes him the first of our home grown priests, as well as our youngest.  He is serving with Fr. Ruben in Juliaca up near Puno and Lake Titicaca. The church and its mission in Tariachi sit at 14,000 feet above sea level – our highest church!

Edith vesting her husband Jerry as a deacon

Deacon Jerry Acosta comes to us from a Pentecostal Church.  He is serving at San Mateo in Lima, which is connected with our largest diocesan school.  Jerry and his wife Edith planted a mission and  continue to minister in the shanty town called Collique.  They feed over two hundred children a week and preach the gospel with great vigor.

Deacon Mariela was a lawyer and now serves in two roles.  She is Bishop Godfrey’s administrative assistant.  She is also assisting up in Puente Piedra, north of the airport in the mission of San Andres.

The about to be ordained prostrate themselves during the litany

Fr. Pastor serves on the mission team in Ica and Ayacucho – what a wonderful name and title for a priest!  When  Mike Chapman was consecrated missionary bishop and evangelist last September, Pastor joined his team of five.  They are planting new churches and developing this diocese in formation.  We call it the Pro-Diocese of the Resurrection.  The area now has worshiping communities in several other towns, including Huancayo and Huancavelica.

In October, God willing, Bishop Godfrey will ordain a new group of deacons.  At this point we are under staffed and the clergy are underfunded.  However, we believe that God will provide.  Perhaps people might like to invest in funding a Peruvian clergy person.  Please pray for more laborers for God’s harvest.  We thank the Lord for those who have come forward and with whom we are working.

Padre Juan Marcos giving a blessing after his ordination

Contributions may be sent to Amigos del Peru.